I’m an avid reader but it was only when someone asked me which female authors were my favorites, I realized that I couldn’t even name five. There’s a difference when you are a woman and you read something written by a woman rather than a man, especially a memoir.

The four books that I mention here are about the different life experiences of four women. However, the most notorious thing they have in common, other than being female, is that they are makers.

“Furiously Happy” by Jenny Lawson could be sum up by the rest of its title: ‘A funny book about horrible things.’ The book starts with the usual “advance praise” quotes from Dickens, Hemingway, Dostoyevsky and Ms. Lawson’s shrink, you’ll know it’s not the usual memoir right from the start. In these stories, Ms. Lawson describes her day-to-day struggles with mental illness. She also discusses her love for taxidermied animals and how sometimes they like to ride her cat. She shares laugh out loud stories about her depression, anxiety, self-harm, her shrinks, her husband, her daughter, and how she deals with all of them. She talks about the stigma attached to mental illness and the hidden battles that no one celebrates once they’re won but everyone has an opinion on if they’re lost. This book may seem to make light of very dark issues but it is an excellent approach to the battles that we don’t get to see, on the fighters we don’t get to celebrate and on the judgment we shouldn’t pass. 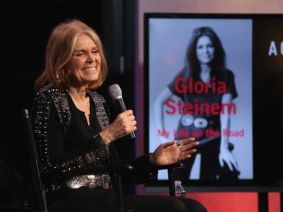 “My Life on the Road” by Gloria Steinem is a collection of stories about the author’s travels. She is an activist, writer, and organizer. Some even say that she’s a feminist icon. She was not only a witness but also an actor during the women’s liberation movement in the 60s. These stories are about the people she met on the road. This book, intentionally or not, gives you a new perspective on feminism and what our generation takes for granted. Ms. Steinem’s memories are the first account tales of a movement that is still very much alive today. She and many others paved the way for women all over the world to matter as themselves and not be defined by being someone’s something.

“You’re Never Weird on the Internet (almost)” by Felicia Day is the tale of the unlikely success of a ‘nerd’. This book covers Day’s unusual homeschooling, her consistent drive to learn, her gaming addiction, her struggling actor problems, her successful web series (“The Guild”), her anxiety, work ethic, successes, and failures. This is the story of how she made of the Internet her most powerful tool to create content for an audience that was often overlooked by entertainment executives. She found her crowd in the most unusual way and keeps creating media as a writer, producer, director and actress.

“The Art of Asking or How I Learned to Stop Worrying and Let People Help” by Amanda Palmer is the unusual story of an independent musician that was one of the first artists to surpass the one million dollar mark on Kickstarter. This is her story and philosophy on how asking for help is a collaboration of giving and taking in order to make art. Her unusual business model could be inspiring for artists who see the music industry as an obstacle for their aspirations. The book came as an expansion to Ms. Palmer’s successful TEDTalk. You can watch it below.

These four women may have different lives and careers but they all share the importance of creating a community, of having a net of people that can support you and help you to get back on your feet. The musician, the actress, the activist and the blogger have opened new doors with their work. They’ve set the example for future generations of girls and boys on how to live creatively. Instead of wallowing in your own problems, why not make something that didn’t exist before and share it with the world, you’ll find your audience eventually. You can make music, videos, organize events, be passionate about a political cause, open a blog and share stories.

Don’t expect for your life to follow the “appropriate course” because such thing doesn’t exist. You have to guide it. Put one foot in front of the other and create your own path. The road you make can only be approved by yourself. The difference of reading a woman’s story as a woman is that you can relate more closely to the flaws you recognize in yourself. You’ll understand that you’re not the only one struggling and that your imperfections can become your greatest assets.

There’s no handbook on how to be a woman, perfect or otherwise. We are not what the media portrays about us, we are not what some men want us to be and we are not what ourselves wish we could be. We are complex individuals finding our voice in a world that sometimes sees us as a threat. Look in the mirror and praise your intelligence, strength, courage, beauty, fragility, and, ugliness, you can have all of these things but you’ll be none of them. Go out there and make things because women all over the world need women like you.

If you want to know more about these awesome women, click on their names to go to their sites:

If you want to read more about kickass ladies writing her stories, these are some recommendations:

The Opposite of Loneliness by Marina Keegan

Slouching Towards Bethlehem by Joan Didion

Girl in a Band by Kim Gordon